Most dependency analysis for C++ involves the analysis of include dependencies to improve compile time. While this is a great start for analyzing dependencies, the goal should be to lower testing and maintenance costs. The way to do that is to make your software more modular. Most software architectures start out clean and with good modularity. Over time, architectural erosion happens. Quality declines and maintenance becomes more expensive because of poorly managed dependencies. 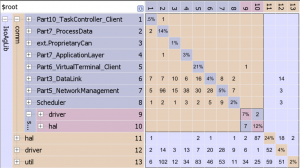 Once dependencies have been analyzed and visualized using a tool like Lattix Architect, it is time to refactor the code and deal with any unwanted dependencies. The two questions in refactoring dependencies are:

See our video on Architectural Refactoring for more details on how to refactor dependencies and perform what-if analysis.

Architectural refactoring can be difficult and should be done with great care. It is not always straightforward how things will work after refactoring has been performed. After each refactoring, the following checks should be performed:

The business goals for dependency analysis and refactoring are to lower testing and maintenance costs. The attributes of this are: 1) testability, where a reduced module size makes it easier to test; 2) safety, where a more modular software reduces the impact of change; and 3) modifiability, where a clean, modular architecture is easier to understand and update. For help analyzing and visualizing dependencies in your C/C++, Java, or C# codebases, check out Lattix Architect.

1. Product Architecture and Quality: A Study of Open-Sourced Software Development